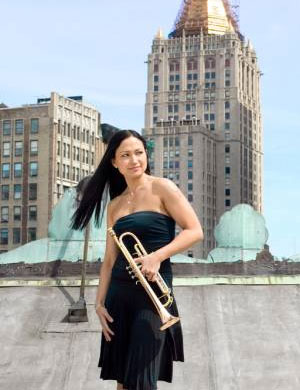 Kiku Collins and her 3001MV

Think of some great American trumpet players. I’m sure everyone can come up with an impressive list of players both past and present. Now, go back through that list and pick out the women. What’s that you say? There aren’t any? Hmmm. Now take a look at your local band programs. How many females occupy the seats in the junior high, high school, or college trumpet sections? I’m guessing not too many. These are exactly the trends Kiku Collins is hoping to bring to an end.

Kiku started her trumpet career in a small, New Jersey town following in the footsteps of her older, trumpet playing brother. By the age of 12 her skills were becoming apparent despite being one of the only females in her school band. At age 16, after spending two summers in their National Music Camp, she earned herself a scholarship and a place in the prestigious Interlochen Arts Academy in Michigan. From there, Kiku went on to study classical performance at the Manhattan School of Music under the tutelage of her mentor, Dr. Mel Broiles. He constantly encouraged her, as one of his few female students, to fight on and pursue her dreams. His words have stuck with her and have helped shape the successful career she has now.

In 2006, Kiku’s career took the biggest jump to date. After years of playing with her own group, sitting in with other artists, and countless studio sessions, she landed the role of Beyonce Knowles’ trumpet player. The next year was a whirlwind. Performing with Beyonce and her band for numerous television appearances, multiple music videos, and a world tour befitting a pop superstar.

Somehow, through it all, she was able to write, arrange, and record her own jazz album. Here With Me is an instrumental album featuring Kiku on flugelhorn and also her multi-tracking on trumpet and trombone. The album debuted to rave reviews, opening doors for the trumpeter including an invite to headline two brass festivals in Europe. First with The Brass Group in Palermo, Italy and second the Durham Brass Festival in Durham, England. Even more impressive is the fact that, despite performing with Beyonce and promoting her own album, Kiku still found the time and energy to continue with her hectic NYC schedule. Playing gigs around the city, sitting in on recording sessions with other artists, and most importantly raising her six year old daughter.

What does the future hold for Ms. Collins? She’s continuing to promote Here With Me while working on album number two. As usual, she can be found performing her solo work all over NYC. You can also catch her playing around town with other artists/groups like Psycho the Clown and Voltaire to name a few. Biggest of all is that she is joining Michael Bolton as the lead trumpet for his current American tour. Pretty good for a girl in a supposedly all boys club. A fact Kiku expects isn’t lost on her young fans. She hopes that her talent, style, and success can inspire the next generation of female trumpet players.

You can learn more about Kiku Collins by visiting her at www.myspace.com/kikucollins or at www.kikucollins.com. Her site includes a bio, blog, schedule, photo album, music samples, and more. Her album, Here With Me, is available from www.innova.mu, www.cdbaby.com, and for download via iTunes.